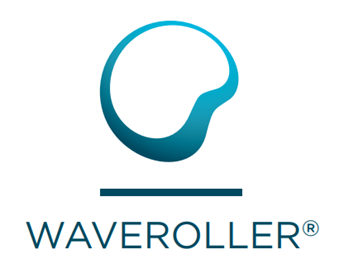 AW-Energy Oy is a Finland-based company developing oscillating wave surge converter - technology. The company has the highest technology readiness level in surge-based wave energy technology globally. The first proof-of-concept device was installed over 20 years ago, and several larger-scale demonstration units have been established since. The first unit designed for commercial projects with a nominal capacity of 350 kW was installed on the coast of Portugal in 2019.

AW-Energy has developed a wave energy converter device called the WaveRoller. The short-term goal of the company is to install the first megawatt-scale WaveRoller array in order to demonstrate the feasibility of the technology in utility level power supply. AW-Energy is working with several potential project sites and customers along with the EU-funded WaveFarm project to take the final steps towards commercial operations.

The WaveRoller is an oscillating wave surge converter that transforms the kinetic energy of the ocean waves into a usable form. The device consists of three main parts: a foundation, a panel, and a power take-off unit. The foundation is a compartmented concrete structure that floats on the water. It is filled with water to submerge the device and hold the WaveRoller stationary by the weight of the structure. The devices are installed at the bottom of the sea at an approximate depth of 10-20 meters. The panel of the WaveRoller unit is hinged on the device's foundation and moves back and forth following the horizontal movement of the waves. This motion is transmitted through a mechanical drivetrain to the power take-off unit, which houses a traditional hydraulic system and electrical generators that convert the captured hydraulic energy into electricity. The produced electricity is exported via a subsea cable to a substation onshore for further use. 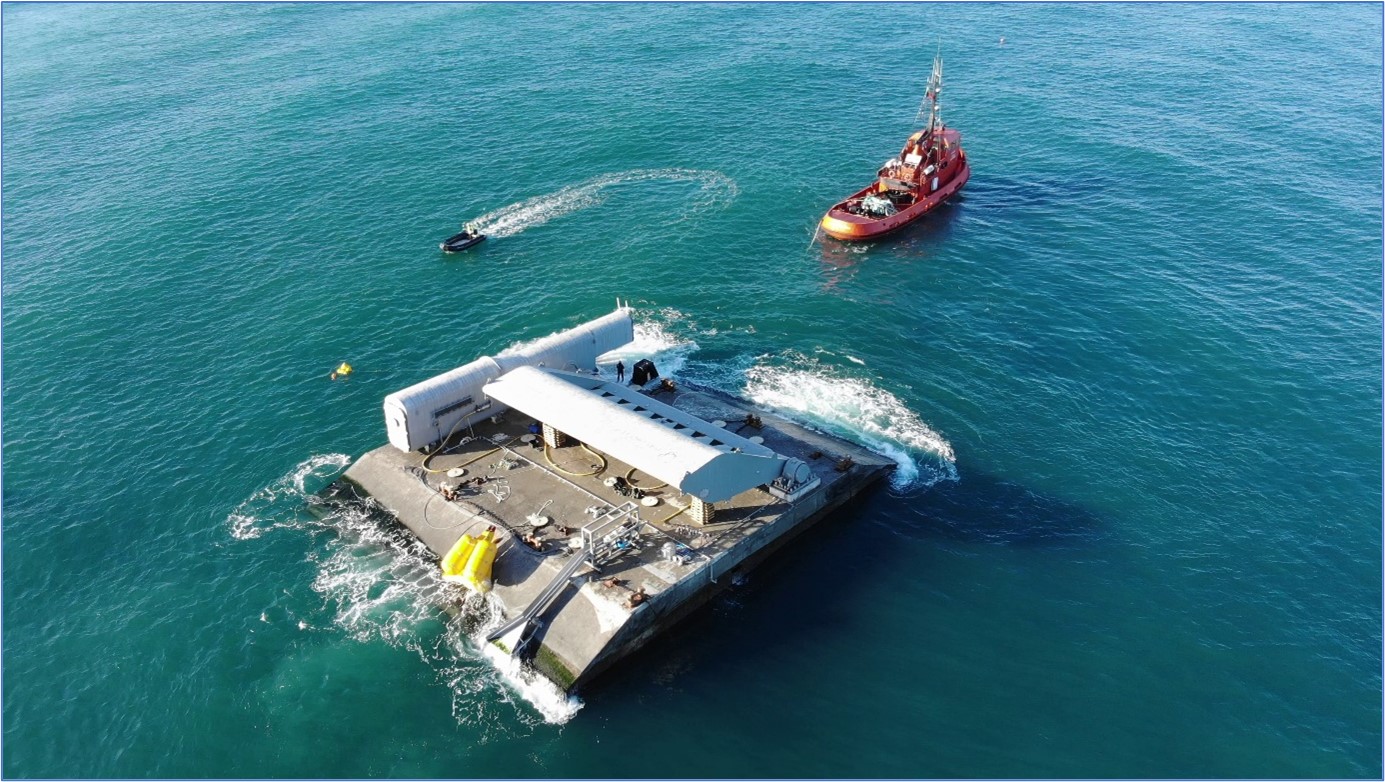 The Dataserver is a .NET application that acts as an interface between WaveRoller devices and data clients, including SCADA UIs and mobile interfaces. The Dataserver is a modular application consisting of components such as PLCRT - for reading data from PLCs of WaveRoller devices, and Alarms - for sending alarm events generated by the PLCs to other modules and providing a list of active alarms as well as means to acknowledge them. The SQL and OPC UA server components designed and implemented in this project by Prosys OPC were integrated into Dataserver as separate modules as well. 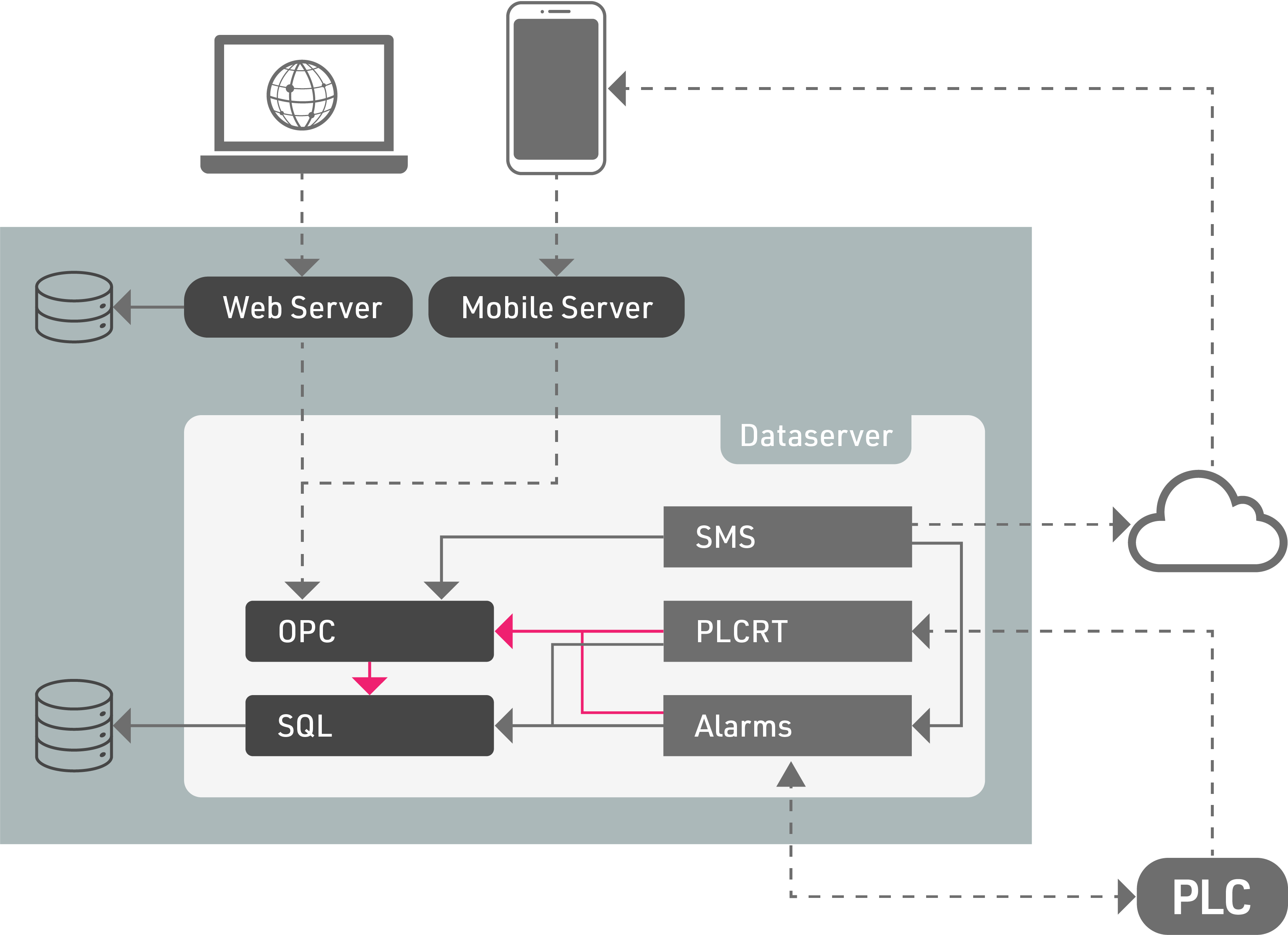 The SQL component stores historical data with MariaDB software. The stored data consists of measurements and events from WaveRoller devices, with each device having its own database. Entity Framework Core was used for creating and updating the databases and their tables when the Dataserver is started; it is also applied for lighter reading and writing operations. MySqlConnector was used for periodic bulk writing of enqueued measurements and events, as well as reading aggregated historical data using procedures. The data tables are partitioned by timestamp range. Real-time data with exceptional aspects is stored longer, while regular data is dropped relatively soon. Key figures of the most important data are also calculated and stored indefinitely. The databases are replicated to another server.

The OPC component manages an OPC UA Server that provides access to current and historical measurements, as well as alarm events, from WaveRoller devices. While OPC UA methods are used to control the devices, the SQL component is applied for historical data access. The Server was implemented with the official OPC UA .NET Standard Stack from the OPC Foundation. The information model for representing WaveRoller devices as OPC UA Nodes on the Server was designed during the project; and the OPC Foundation's ModelCompiler was used to generate code based on the information model. Measurement and device parameters present in the OPC tree were populated from existing modules of the Dataserver software. The OPC UA Server is utilized by a web server and a mobile server to provide UIs for desktop and iOS devices, respectively. It is also intended to be used by customer applications. 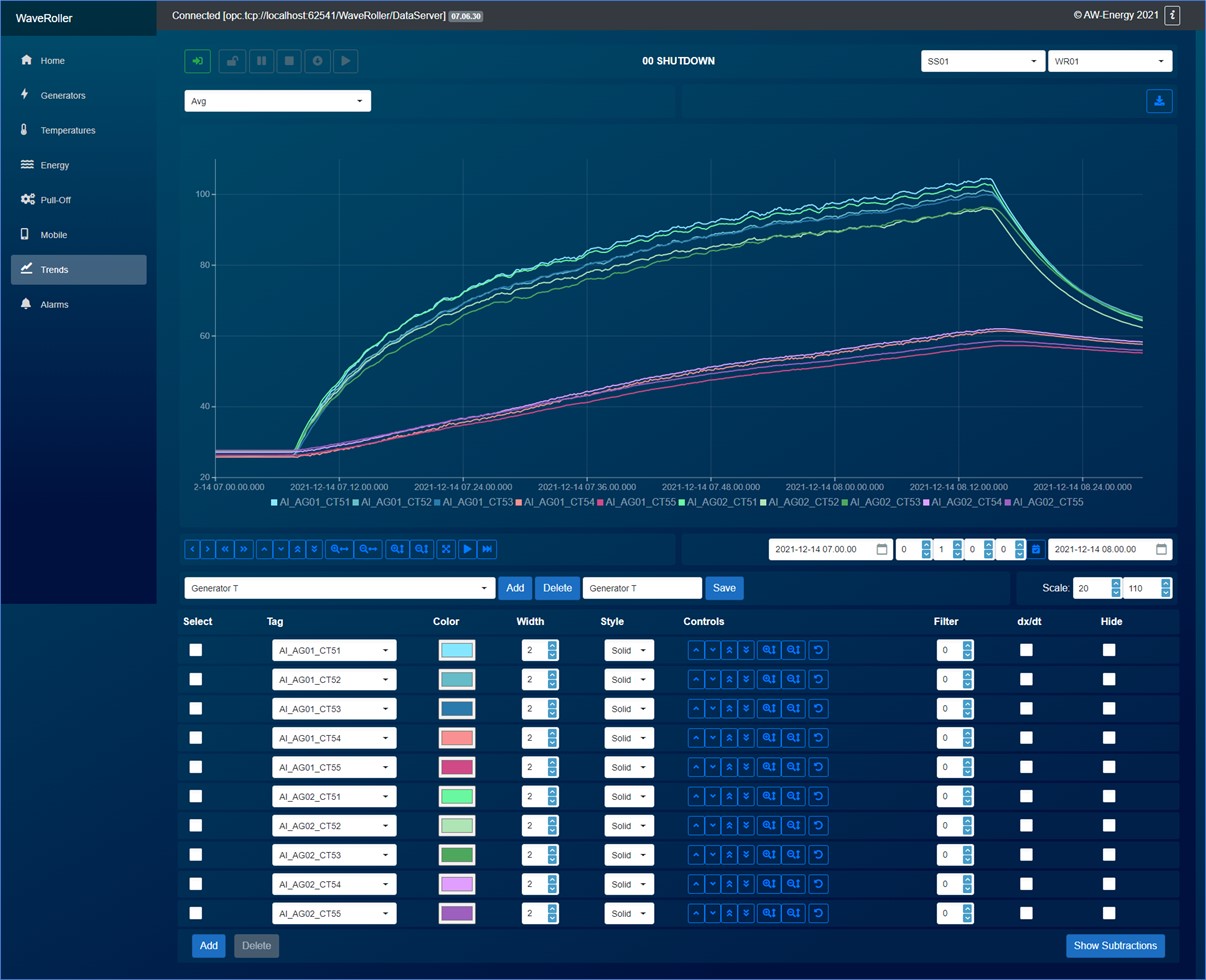 Quickly handling and storing the large amount of data generated by the control system is a major challenge and requires innovative solutions. We designed and tested several approaches at our full-scale test facility and ultimately discovered an option well suited for our application in collaboration with the experienced team at Prosys OPC. There are challenges that can only be uncovered during full scale benched testing with vast amounts of rapidly changing data. The collaboration with Prosys enabled us to achieve the goals of this challenging project in good time.

We're happy to answer any questions you might have.